Gluten-Free Pumpkin Cheesecake Recipe made with greek yogurt instead of cream cheese and topped with butterscotch ganache for a creamy and luxurious finish. This is also an eggless pumpkin cheesecake that is a holiday favorite and is made in an instant pot for easy preparation.

Why I Love This Gluten-Free Pumpkin Cheesecake

I always strive to make conventional desserts healthily by modifying ingredients and cooking methods. This gluten-free pumpkin cheesecake hits the mark in so many ways!

An Easy Pumpkin Cheesecake Recipe in an Instant Pot

An instant pot is very versatile, and you can use it to make all kinds of recipes, including desserts. This instant pot pumpkin cheesecake recipe will amaze you with its soft and creamy texture. When using an oven to make a cheesecake, you must keep a very close eye on the baking time and temperature to ensure the pumpkin cheesecake crust does not get too dry or overbaked. The cooking process for this recipe is less complicated in an instant pot.

This recipe is much more relaxed and easy to follow regardless of the experience you have cooking with an instant pot, and it is a dessert favorite during the holiday season!

A large number of vegetarians around the world do not eat eggs. This is an eggless pumpkin cheesecake recipe that's perfect for serving at a holiday gathering where you have vegetarian guests attending who avoid eggs. Since it's also gluten-free, wheat-free, and soy-free, you can serve this luscious dessert without worrying about dietary restrictions. That makes life more straightforward when you are entertaining a larger crowd.

Top the gluten-free pumpkin cheesecake with the prepared butterscotch ganache. When serving, top each slice with a dollop of whipped cream topping for an elegant and delicious dessert that can't be resisted!

Store the cheesecake covered in the refrigerator for up to one week. The flavors will become bolder as time passes, and you may find the last bite amazing!

Please leave a comment or feedback if you try this recipe! 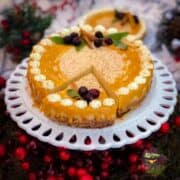 For the Cheesecake Filling

For the Whipped Cream Topping

For the Vanilla Whipped Cream

This site uses Akismet to reduce spam. Learn how your comment data is processed.

Hi, I'm Rupali! Welcome to my food blog where I love to share healthy vegetarian recipes from my North Indian roots and present day. My recipes range from simple to elaborate showstoppers.