The Moong Dal Vada recipe to make in a healthier way with the same delicious taste we crave for. I have used a seasoned cast iron takoyaki plate to shallow fry instead of deep-frying. This proposed method makes this appetizer much better on the health chart. Also shown below are several variations on how you may serve these with different accompaniments.

However, traditionally these fritters are deep-fried and all the above nutritional benefits are lost during the frying process. Fried food, as everybody knows, leads to clogged arteries which in turn lead to strokes, Alzheimer’s, and other serious health issues. Below is an attempt to make low-fat Green Gram Lentils (Chilka Moong Dal) Fritters but with the same authentic taste.

Health Benefits of the Main Ingredient of Moong Dal Vada

Green Gram Lentils (Chilka Moong Dal) have a lot of nutritional benefits. They are a good source of protein, high in dietary fiber, and low in calories. It has a low GI (glycemic index), which makes it good for people with diabetes. These lentils are also easy to digest making them an attractive option for people with a sensitive stomach.

Moong dal vada can be served in many different ways. Depending on the season, location, and mood you may see them served with different accompaniments and in different forms. Here I have shown to of my most often used ways of serving moong dal vadas.

This particular version is not vegan due to the use of yogurt. Soak the fritters in salted warm water for 15 minutes and then squeeze all the water out from each fritter. Now, either dip the soaked fritters in yogurt or just top with yogurt on the plate. Sprinkle some roasted cumin-powered, black chili powder and salt on top. Serve with mint cilantro and tamarind dip (green chutney and saunth).

If you are planning to use this variation, you can either use plain fritters as described above or add green onions and radish to the batter mix before making a fritter. This will further enhance the flavor of the fritters and at the same time increase nutritional benefits. Radishes are rich in folate, fiber, riboflavin, and potassium. They are also a good source of copper, vitamin B6, magnesium, manganese, and calcium.

Your savory and tangy snack 'Ram-Laddu' is ready. 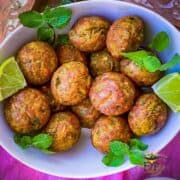 This site uses Akismet to reduce spam. Learn how your comment data is processed.

Hi, I'm Rupali! Welcome to my food blog where I love to share healthy vegetarian recipes from my North Indian roots and present day. My recipes range from simple to elaborate showstoppers.