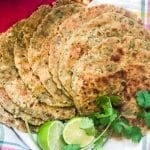 Easy everyday recipe for Cilantro Paneer Paratha wherein paneer and cilantro are incorporated in dough itself. This greatly reduces the time, effort and skill needed to make these paneer parathas compared to making stuffed paneer parathas. You can also freeze for later use and prepare in just few minutes on weeknights. For those not familiar with this flat bread, Paratha means thin flat unleavened shallow fried bread, mostly made out of wheat flour.